05 Nov Behind the boom in Joburg’s apartments

The housing market may well have cooled, but Joburg is in the midst of a sectional-title development boom 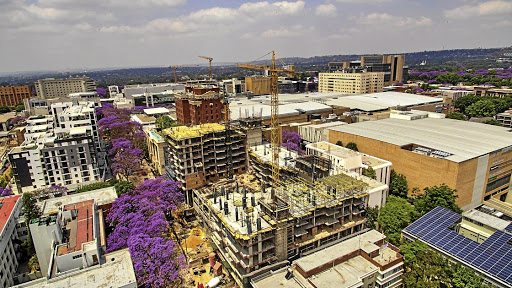 Apartment living is taking off in Joburg, judging by the crop of luxury residential developments under way across the city or on the drawing board. Sectional-title buyers are spoilt for choice, with at least 2,000 apartments expected to come on stream in two to three years, the bulk of them in Rosebank, Sandton and surrounds.

The Leonardo, arguably the poshest and tallest mixed-use building to be constructed in Africa, will add more than 220 apartments to the Sandton market on completion next year. More than 80% of the apartments at the Legacy Group and Nedbank’s 55-storey skyscraper in Maude Street have been sold off-plan, with prices starting at about R4.5m for one-bedroom units. Penthouses have fetched up to R60m apiece.

That translates into an average selling price of R45,000-R100,000 per square metre, thought to be a new benchmark for sectional-title prices in Gauteng.

A few blocks down the drag, on Rivonia Road in Illovo, another lavish high-rise development will be launched off-plan this month. The 29-storey, triangular The Saxony will no doubt give The Leonardo a run for its money. It offers 397 apartments, each exuding “penthouse grandeur and magnificent views”, says Saxony Developments CEO Rajan Naidoo.

Also in Sandton, Abland has started earthworks on Sandton Gate, along William Nicol Drive. The 45,000m² mixed-use project will include a sizeable office component, as well as 137 two-, three-and four-bedroom apartments priced from R2.95m.

In Rosebank, midway between Sandton and the Johannesburg CBD, a host of new sectional-title apartment blocks are on the market, at a slightly lower price point than Sandton — typically in the range of R28,000-R38,000 a square metre.

We expect to see around 11,500 more people working in the Rosebank precinct by the end of 2019

Renprop has launched three such developments in Rosebank since 2014, totalling about 500 apartments. The Vantage, in partnership with Grapnel Property Group, sold out within 10 days at an average square-metre price of R28,000. At Renprop and Grapnel’s The Tyrwhitt, one-bedroom units have sold from R2.155m, two bedrooms from R2.885m, and three bedrooms from R4.125m. The Median, opposite The Zone@Rosebank, offers a selection of apartments spread over 14 floors, with prices starting at about R2m for a 48m² unit.

JSE-listed Emira Property Fund has also entered the Rosebank residential sector with The Bolton, on Sturdee Avenue. It has turned the old Sasol office building into 280 one-and two-bedroom apartments, which rent out for R7,200-R12,000 a month.

On the corner of Keyes Avenue and Baker Street, fellow JSE-listed Redefine Properties is developing Park Central. At 20 storeys, it will be the tallest building in Rosebank on completion. Buyers have 159 apartments to choose from, at R2m-R16m.

Also in Keyes Avenue, on the corner of Jellicoe Avenue, Tomorrow Co plans to bring 139 apartments to the market in phase 2 of its Keyes Art Mile development. The first phase — the Trumpet Building — houses acclaimed chef David Higgs’s restaurant Marble, among others.

The new addition, called Thirty Keyes, will comprise one-and two-bedroom apartments and “ateliers” (live-and-work units), as well as a ground-floor retail section and an art museum and exhibition space.

Anton Taljaard, co-founder and director of Tomorrow Co, says the idea is to provide plenty of green space, with apartments opening onto a central, communal courtyard. Each apartment has a balcony, while the larger two-level units have their own private landscaped courtyards. A few have access to private roof gardens.

Around 25 of the 55 units on sale in the first phase of Thirty Keyes have been sold since the development launched on September 20.

Taljaard believes Thirty Keyes stands out because of its well-considered design, value proposition and location within a pedestrianised neighbourhood, where residents can walk to coffee shops, restaurants, furniture and design stores, and art galleries.

Given how many residential developments are springing up in Rosebank, the question arises as to whether there will be sufficient demand for the new stock.

Joburgers are getting into apartment living, but it doesn’t come cheap

Renprop MD Chris Renecle concedes that there has been a general slowdown in housing demand in Joburg due to the depressed economy. However, he believes demand for apartment living, in Rosebank in particular, will be supported by ongoing commercial expansion. About 200,000m² of office space is expected to be added to the node in the next few years, which will mean the continued influx of executives.

“More and more people want to live closer to their place of work while others are relying increasingly on public transport such as the Gautrain. We expect to see around 11,500 more people working in the Rosebank precinct by the end of 2019, which will spur demand for upmarket executive accommodation,” Renecle says